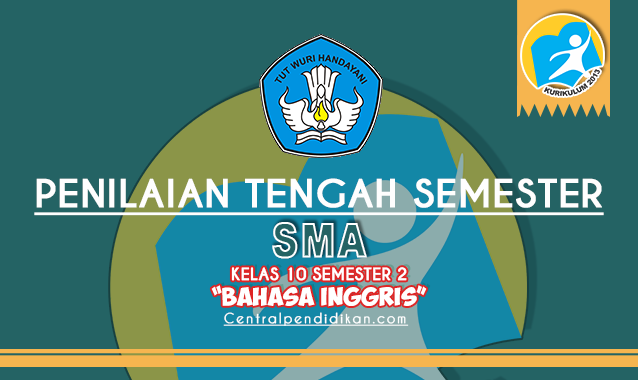 Contoh Soal PTS Bahasa Inggris Kelas 10 Semester 2 (Genap) dan Kunci Jawaban selanjutnya dapat dipelajari sobat peserta didik SMA untuk meningkatkan pemahaman terhadap materi maupun jenis soal AKM (Literasi dan Numerasi). Yang mana sejalur dengan tujuan pembelajaran Kemendikbu.
Selamat mengerjakan.
Lampiran Pdf  (LENGKAP) + Jawaban silahkan di cek di bawah artikel
Text 1 for quetion 1 to 3
Bacharuddin Jusuf Habibie was born on June 25, 1936. He was the Third President of the Republic of Indonesia, from 1998 until 1999. He was born in parepare, South Sulawesi to Alwi Abdul Jalil Habibie and R.A. Tuti Marini Puspowardojo. His father was an agriculturist from Gorontalo of Bugis descent and his mother was a Javanese noblewoman from Yogyakarta. Habibie continued his studies in Jakarta. In 1955, he moved to Germany. He received a degree in engineering in Germany, giving him the tittle Diplom-Ingenieur in 1960. In 1962, Habibie returned to Indonesia for three months on sick leave. During this time, he was reacquainted with Hasri Ainun, the daughter of R. Mohamad Besari. The two married on May 12, 1962 and returned to Germany shortly afterwards. They settled in Aachen for a short time before moving to Oberforstbach. In May 1963 their first son, Ilham Akbar Habibie, was born and later another son, Thareq Kemal Habibie.
1. The text is about the ... President of the Republic of Indonesia.
a. Frist
b. Second
c. Third
d. Fourth
e. Recent

3. “They settled in Aachen for a short time before moving to Oberforstbach.”
The word ‘they’ refers to ... .
a. Alwi Abdul Jalil Habibie and R.A. Tuti Marini Puspowardojo
b. Habibie and Hasri Ainun
c. Hasri Ainun and her father, R. Mohamad Besari
d. Habibie and his parents
e. Ilham Akbar Habibie and Thareq Kemal Habibie

Text 2 for question 4 to 7
On Thursday evening, at about 9 p.m., Mr. Harris was driving along Jalan Pemuda. Suddenly, a truck coming from the opposite direction collided with his van. The front door of Mr. Harris’ van was ripped off by the impact of the crash and his right arm was seriously injured. Mr. Harris was in a semi-conscious state because of the pain and shock.
Then, an ambulance arrived and brought Mr. Harris to the hospital. Mr. Harris was sent to the hospital’s emergency ward. The hospital immediately mobilized a specialist team of doctors to cure Mr. Harris. They decided that Mr. Harris should be operated as soon as possible.
After having an operation, Mr. Harris was treated in the intensive care ward for two weeks. Doctors and nurses closely monitored Mr. Harris. They were glad to see that he was in a stable condition and got better. Susan, Mr. Harris’ wife, looked pale and tired because she was constantly by her husband’s bedside. However, she was glad that her husband was alive and got better. She was really grateful to the doctors and nurses in the hospital.

4. When did the accident happen?
a. Early in the morning.
b. In the afternoon.
c. At dusk.
d. In the evening.
e. Late at night.

6. What is the purpose of the text?
a. To entertain the reader
b. To tell about past experience
c. To inform the readers that something is the case
d. To explain how something occurs
e. To discuss the readers’ experience

7. What is the main idea of third paragraph?
a. The accident happened on Jl. Pemuda
b. Mr. Harris got seriously injured
c. A good treatment made Mr. Harris no longer sick
d. Mr. Harris was sent to the hospital right away
e. The decision to operate Mr. Harris

Text 3 for question 8 to 12
Once upon time,there was a handsome man. His name was Batara Guru Sahala. He liked fishing. One day, he caught a fish. He was suprised to find out that the fish could talk. The fish begged him to set it free.
Batara Guru could not bear it. He made the fish free. As soon as it was free, the fish changed into a very beautiful woman. She attracted Batara Guru so much. He felt in love with that fish-woman. The woman wanted to marry with him and said that Batara Guru had to keep the secret which she had been a fish. Batara Guru agreed and promised that he would never tell anybody about it.
They were married happily. They had two daughters. One day, Batara Guru got angry with his daughter. He could not control his mad. He shouted angrily and got the word of fish to his daughters. The daughters were crying. They found their mother and talked about it.
The mother was very annoyed. Batara Guru broke his promise. The mother was shouting angrily. Then the earth began to shake. Volcanoes started to erupt. The earth formed A very big hole. People believed that the big hole bicame a lake. Then this lake is known as Toba lake.

11. The moral lesson that we can get from the story is...................
a. Don’t believe to your daughter.
b. We have to take good care of other secret
c. We shouldn’t shouted angrily to our daughter
d. The shake of the earth is dangerous
e. Toba lake was formed from a big hole

Text 4 for question 13 to 15
A young student was walking in the woods when he heard a small voice calling him. He looked I around but could not see anyone. The voice called out again, and appeared from the roots of an enormous oak tree. There, the student found a bottle, in which there was a tiny man who begged.”Let me out.”
So the student removed the, cork, and a cloud of smoke emerged and grew into a frightening giant.
“I am a genie ,” said the giant, I was imprisoned in the bottle by magician. But now that I am freed prepare to meet your end!”
“Wait a minute,” said the young man. “I don’t believe one word you have said. A giant of your size could not have really come out of the little bottle. You could never get into it.”
“Of course I can,” said the genie, I’ll prove it to you.” As soon a the genie returned to the bottle, the young student replaced the cork. The next time, in order to get free, the spirit had to make a bargain with the student, not only would it refrain from killing him, but it had also to give him a dagger which turned into gold everything it touched, and healed all the wounds. And afterwards, thanks to that magic dagger, the student became a rich and famous doctor.

13. The orientation of the text above is ….
a. Young student was walking in the words when he heard a small voice calling him
b. “I am genie,” said the giant,” I was imprisoned in the bottle by magician . but now that I am freed, prepare to meet your end!
c. As soon as the genie returned to the bottle, the young man put the cork back in
d. The student became a rich and famous doctor
e. The next time, in order to get free, the spirit had to make a bargain with the student

15. The communicative purpose of the text above is….
a. To tell past events
b. To amuse the readers
c. To persuade the readers
d. To describe about the young student
e. To share with the readers about the experience

16. Give tick which one are the purposes of the narrative text!
a. To describe about the people, things, and beautiful places..
🗌RIGHT
🗌FALSE

b. To amuse the reader about tthe story
🗌RIGHT
🗌FALSE

d. To entertain the reader with the story
🗌RIGHT
🗌FALSE

e. To persuade the reader about the story
🗌RIGHT
🗌FALSE

17. Give tick or cross Which of the generic structure of the recount text!

18. Match the following words with their Indonesian equivalents! 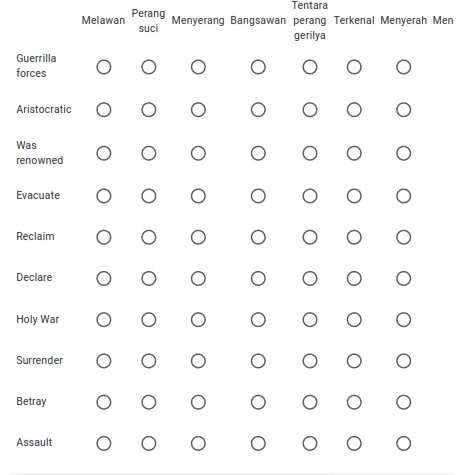 19. Match Generic Structure of narrative text in colum A with colum B 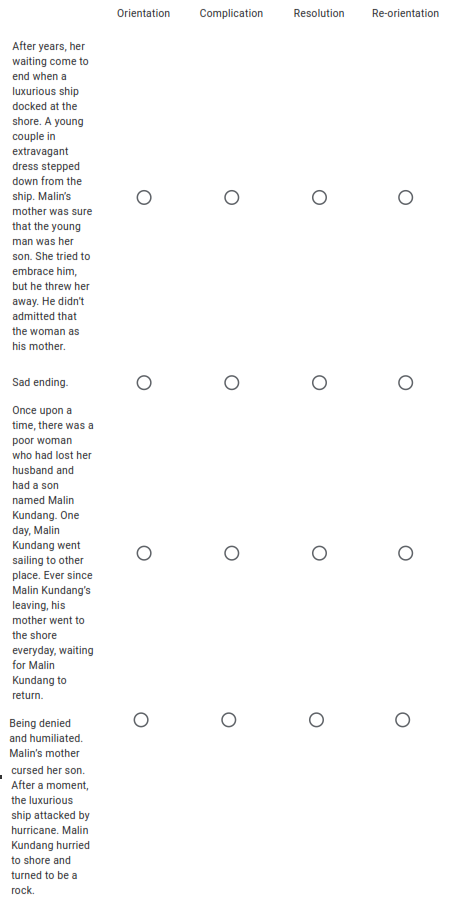 20. Answer the question briefly!
After reading the story of Malin Kundang. What is the moral value that we can take from the story?
Demikian artikel Contoh Soal PTS Bahasa Inggris Kelas 10 Semester 2 (Genap) 2022/2023. Semoga bermanfaat..